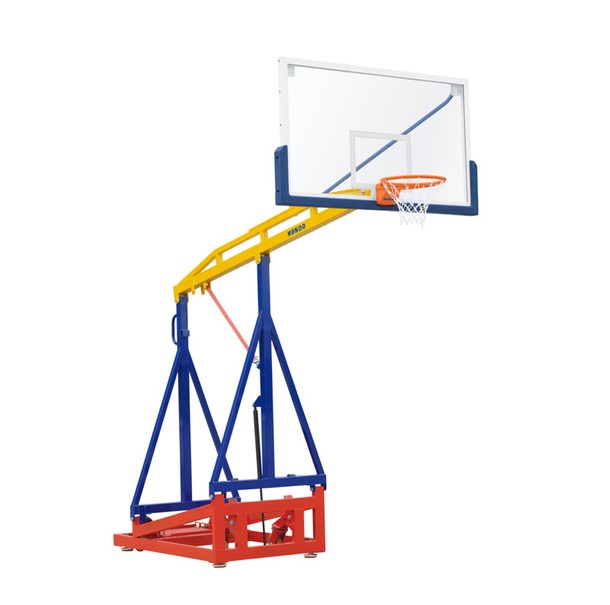 Set of two indoor portable floor-standing basketball units with manual elevation and transport without the need to use any additional device. Its special design allows for two different positions: basketball playing position and folded position for storage and transport.

It has been designed to comply with FIBA regulations and it has been certified FIBA Level 3 competition). MONDOCLUB has been tested and certified by the I.B.V. (Institute of Biomechanics of Valencia) according to the European Standard EN 1270 .

Manufactured in steel structural tubes, this equipment has been designed using the latest CAD technology and the finest analysis elements to calculate impact absorption and vibrations produced when playing basketball.

The MONDOCLUB main structure consists of a support arm, two posts and a base.

The arm is made of a squared steel tube that has a rail located at the top. A folding or unfolding movement of the basketball unit is produced when manually acting over the rear post. This movement is helped by gas springs that reduce the strength needed.

The arm can be manufactured in two different projections, depending on the customer’s choice: 2,25 m or 1,65 m.

The basketball unit has a security bar that runs from the front post to the arm. It is used to immobilize the posts during play and to prevent folding or shifting of the unit

The base has a total of 4 retracting wheels and a system of polyurethane supports. This allows the basket to stand perfectly stable on the floor when in playing position. It also makes it quick and easy to move the basket around when folded.

The rim can be a tilting or a fixed rim. The tilting rim complies with FIBA regulations. It is characterized by the absence of net hooks and net mesh that have openings of more than 8 mm. to avoid any possibility of player injury.

The fixed rim is designed and manufactured according the European Standard EN-1270. Made of steel with a 20 mm. diameter, it has a doubled plate welded with an angle to fix it to the backboard. Two ribs join the plate with the rim to make the whole unit more rigid unit. The rim is fixed to the backboard using 4 screws.

To fix the net to the rim, there are 12 hooks on the rim, placed at equal distance, and they do not have sharp ends that could be dangerous for the player.

Any type of Mondo glass backboard or methacrylate boards can be adapted.

The backboards can be vertically and horizontally ruled and fixed in a simple manner to assure the correct position during play. The backboard is taken down to facilitate storage of the basketball unit.

MONDOCLUB upholstered red protections for the arm, the post and the stand base are not included, ask for quotation if needed (reference PK375).

All the couplings and joints are made of steel and have been submitted to a zinc-coating treatment. This product is painted using polyester powder paint, which is applied after a degreasing treatment using a pressurised phosphate bath and cured in an oven at 200ºC.