On Saturday, at the Jan Pellez Stadium, Aubiere, world bronze medalist Hugues Fabrice Zango set an historical record  in the indoor triple jump discipline with an astonishing 18.07m* on a Mondo Track. The stadium is equipped with Sportflex Super X 720 the ideal athletic track surface for facilities dedicated to both competition and training because it guarantees athletes the perfect combination of shock absorption, vertical deformation and energy return. The 27-year-old from Burkina Faso added 15 centimetres to the previous indoor record, set by his coach Teddy Tamgho back in 2011 in Paris, as well on a Mondo track;  this mark brings him close to the record of 18.29, held by the British Jonathan Edwards also set on a Mondo track during the 1995 World Championships in Göteborg.
Zango becomes the first athlete from Burkina Faso to set a world record and the first African athlete to set a world record in a men's jumping event.
Hugues' previous outright best of 17.77m was also set indoors and it came in his first competition of 2020. His outdoor PB of 17.66m was set at the World Athletics Championships Doha 2019, again on a Mondo track. 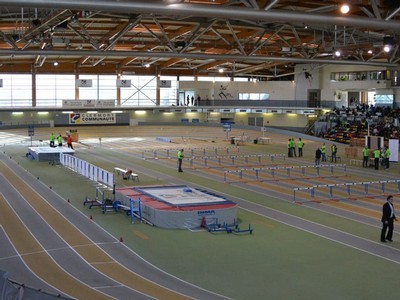