European Athletics Indoor Championships, 36th edition
Period: from 4th to 7th March 2021
MONDO is the Official Supplier of the event

Today, the Mondo banked track is in the Arena Torun, awaiting the start of the 2021 European Athletics Indoor Championships:  and there's a long story behind it's current installation.

Mondo's athletics track in Torun represents a combination of several different elements: the outstanding quality of Modultrack solutions; close collaboration between the Mondo team and the Tamex company, Mondo's dealer; and the proven ability to adapt, which allowed this project to overcome structural challenges and technical modifications in the middle of the construction phase.

There’s no doubt about the final result: the construction of the banked track was a clear victory, as reflected first and foremost by the satisfaction of the athletes and professionals.

A step back in time: in the beginning there were two tracks

The track we see today in the Arena Torun is none other than the track used at the 2014 World Athletics Indoor Championships, which took place in the nearby Polish city of Sopot.
The initial plan was to build two separate tracks: one for the city of Sopot, the other for the city of Torun. However, following discussions between the two cities, it was agreed that only one track would be made, and that it would be tailored to two different venues: first the Ergo Arena and then the Arena Torun.
This was a real challenge, since the Ergo Arena in Sopot, which was originally designed as an ice hockey stadium, was not ready to accommodate an indoor track like the one that was to be built. The solution was to build a three-metre-high substructure, on which the track itself was then laid.
A challenge that was overcome successfully thanks to the work by the Mondo and Tamex teams, and which was later acknowledged by the praise received at the end of the World Championships, complimenting the excellent stability of the track and the lack of noise and vibration during the races.

The track was dismantled immediately after the end of the World Indoor Championships, to be moved to the Torun venue by the end of April 2014.
Thus was made possible by Mondo’s technology: the company designed a system that allows all the track’s pieces to be disassembled and assembled through a quick coupling system.

A new start for the portable banked track installed in Sopot and then moved to Torun, in anticipation of the European Championships in March 2021.
Speaking about the Mondo track, Krzysztof Wolsztynski, organiser of the 2021 European Indoor Championships, anticipates high expectations:
"The European Athletics Indoor Championships won’t be the first international event in Toruń, so from my experience I know the track is suitable for athletes. A lot of top athletes ask to take part in the indoor event because they know they can run really fast on the Mondo track in Toruń and improve their personal bests. I hope the athletes will come to Toruń well prepared and that they will achieve great results on the track and in technical competitions.”
His words also reference the results obtained during other national and international events that have taken place in Torun in recent years, including the Copernicus Cup, a stage of the World Athletics Indoor Tour Gold.
It was at this event on 8 February 2020 that Duplantis set a new world record with a pole vault of 6.17m: a record that was broken a few weeks later by Duplantis himself, this time on the Glasgow track (also provided by Mondo) with a jump of 6.18m.
These results demonstrate the importance of having a track with outstanding specifications on your side. And speaking about the success of the Copernicus Cupevent, Krzysztof Wolsztynski said: "Yes, relocating the Mondo track from Sopot to Torun gave us extra visibility. Torun has become a famous city on the world map of indoor athletics. This means we can organise international meets and athletes are eager to take part in Torun. This success has contributed to our expansion and we are delighted to participate in the World Athletics Indoor Tour. Every year we strive to invite the best athletes to each event and give them the opportunity to run fast, jump high and throw far.”

The words and deeds of athletes and professionals endorse the features of the Mondo track.
The modular construction and claw-locking system make the track easy to assemble and disassemble; the structural characteristics remain unchanged even after numerous uses or moves; and finally, the Sportflex Super X 720 K39 surface used translates the needs of athletes into a material that combines superior comfort with high performance.
The hexagonal air cells that make up the Sportflex Super X surface guarantee the ideal combination of shock absorption and energy storage and return, which then translate into real benefits for the athletes themselves: reducing athletes’ fatigue and risk of injury during training and competitions.
The preference of professionals for these tracks is also reflected in the words of the coach of the athletics team training in Torun, Krzysztof Kęcki:
"We have a lot of tracks with MONDO surfaces all over Poland... and I can say that many athletes prefer these surfaces. MONDO is one of the best. We competed on a MONDO track in London (IAAF WC 2017) and many Polish athletes achieved some very good results. We won 6 gold medals in Glasgow, so Polish athletes are happy to be competing on a MONDO track at home in Torun for the European Indoors 2021."

5-7 March 2021: looking forward to the European Indoor Championships in Torun

There is an excited anticipation for the 2021 European Athletics Indoor Championships; and with this being the 36th event, Poland is set to be the host and organiser for the second time.
The countdown has begun and it’s not long until 4 March, when the opening ceremony at 18:30 will kick off one of the most eagerly awaited events in the European sporting calendar.
The programme will see the competitions spread over four consecutive days and as many as 600 of Europe's best athletes competing for the highest score.
The European Indoors and all those taking part will no doubt keep their enthusiasm levels as high as always.

To create the athletics surface of your indoor and outdoor athletics facility, both for training and for competitions, contact us with this form. 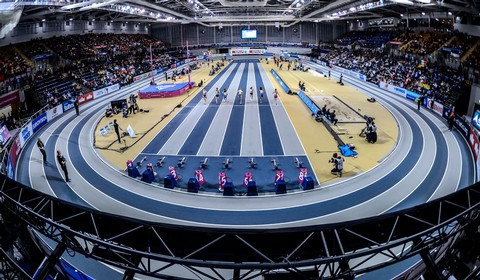