At the CAMPIONATI ITALIANI ASSOLUTI INDOOR in Ancona Gianmarco Tamberi imposes jumping on the first attempt 2.32. It is the second world performance of the year after 2.35 of the Japanese Naoto Tobe, and best measure of Europe. Tamberi thus won the  Italian champion title. In the women's field, title to Elena Vallortigara.  With her 1.92m improved by two centimeters the personal primacy indoors and also her debut of last Saturday in Banska Bystrica ( 1.90m).  The match was decided at 1.92, missed by Alessia Trost (Fiamme Gialle).
Francesco Fortunato instead takes home a World Lead in the 5km with 18: 47.63
The triple jump competition showed as well great results. Simone Forte (Fiamme Gialle) lands at 16.66 of the personal best and graduates himself the Italian champion. The European under 20 cross champion Nadia Battocletti (Fiamme Azzurre) demolishes the Italian junior record with 9: 18.33 (previous 9: 34.17 by Adelina De Soccio in 2005). Title in the 60 meters for Johanelis Herrera (Atl. Brescia 1950 Ispa Group), which prints on the display her 7.32.
In the 800 meters the middle distance runner Eloisa Coiro (2: 05.74) breaks down her personal best of almost three seconds and climbs to the second place of the junior lists of all time.

The stage of such perfomances was the HYDRAULIC TRACK supplied by MONDO.

In 2005, the city of Ancona inaugurated its Palaindoor; the sport facility boasts 1600 seats, a central track and a six lane track aside. It is a versatile sporthall, thanks above all to the choice of building an hydraulic banked track that allows the use of the hall in a diversified manner: when the parterre of the track is at rest, it can host side activities (fencing competitions, exhibitions, competitions and exhibitions); in this way it is easier to find the economic resources necessary for the management of the sporthall. The building was designed by Roberto Buccione, a former Italian athlete, now he is a renowed sports facility designer. The plant underwent an extraordinary maintenance intervention in 2018: renewal of the 8 lanes of the central lanes and of the long, triple jump and the pole vault areas, which were worn out. Here are the words of the architect at the end of the recently completed maintenance works: "seeing this plant still alive is a great satisfaction as an architect but it is also a reason for civic pride because the municipality of Ancona has been able to keep alive and active one flagship of the Italian indoor athletics " 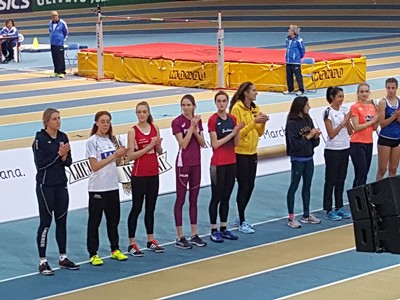