In Oklahoma City the renovation of the city has been going on for over twenty years. Now is the time of school facilities and each new installation word of mouth on the performance of Mondo flooring spreads. So the next school staff and students are looking forward to completion of its own gymnasium.

"Mondo floors are great for minimal wear and tear and look amazing for years. This floor is also beneficial for the school district because with limited funds, there is no need for waxing and high maintenance – just soap and water makes it look brand new again.” , Abdullah Ibraheem, architect

In 1993, voters in Oklahoma City, capital of the state of Oklahoma, supported a unique type of funding source to help with municipal improvements such as new and upgraded facilities for sports, recreation, cultural and entertainment.

With this funding, the MAPS (Metropolitan Areas Projects) program began on December 14, 1993 and by August 17, 2004 all of the projects from the first of three phases were completed. The source of this extraordinary revenue stream was a one-cent sales tax approved by voters, which was in place for six years, Today, facilities such as the Bricktown Ballpark – home field for the Oklahoma City Redhawks AAA baseball team, the Chesapeake Arena – home to the Oklahoma City Thunder NBA basketball team, and the Bricktown Canal, which winds through the industrial area turned tourist attraction has given the City a new lease on life, and a healthy boost to its economic development bottom line.

A gym for each school

Building on the success of phase one of the OCMAPS program, in 2001 the voters approved phase two and brought back the one cent sales tax for another seven years.

This new program was called OCMAPS2, or MAPS for Kids, and was aimed at improving public schools. In addition, a $180 million bond issue was approved for Oklahoma City Public Schools. Shortly after, the OCMAPS Trust was developed for financial management of both the new sales tax and bonds. Because the funds were collected prior to construction, when the MAPS2 projects are completed they are debt free.

One of the most important in the creation of new gyms involved the choice of flooring. “The flooring was a major aspect and the administrators at Oklahoma City public schools were not familiar with Mondo products. We explained that even though the cost is higher than vinyl sheeting or tiles, the sales tax program they had in place would allow them to afford a higher end product."  says Abdullah Ibraheem, architect. “After careful consideration of options available for gymnasium flooring we decided to go with Mondo Advance, unless there was another product proven equal, which was a stipulation in the specifications. We found that Mondo floors are great for minimal wear and tear and look amazing for years. This floor is also beneficial for the school district because with limited funds, there is no need for waxing and high maintenance – just soap and water makes it look brand new again.”

Because the gymnasiums were built for young children, bright colors were chosen to bring more fun to the room. “In working with the architects, we decided that having a wood grain-style floor with school colors incorporated into the designs would be a good combination,” he says. “So far, everyone has been pleased with the end results. The kids love the flooring because if they fall, they don’t hurt themselves like they would on other surfaces. The teachers enjoy the fact that they can still use tables and chairs in the area if they want to, and the gyms can also be set up for science fairs and community gatherings. This multipurpose factor is one more reason to justify the cost of the flooring.”said the architect Ibraheem.
The compliments continue at school level with all staff, including the gym teachers. “The floors are great,” says Dode Jordan from West Nichols Hills Elementary. “It makes it easier to stand for an extended time as a teacher because it is a lot more cushioning. A lot of times kids will fall and while the Mondo floor is not as hard as concrete or regular hardwood floors. The floor in our gym has the look of light hardwood, with our school colors of blue and yellow all the way around the basketball court.”

Ryan McCaslin, representative for Performance Surfaces LLC, has been working with Mondo flooring for over 11 years and can attest to the product’s quality and customer satisfaction. “For Oklahoma City schools, it makes a lot of sense to use Mondo because it is so durable and lasts a long time,” he says. “The administrators at the school district have an opportunity to build gyms now, and they likely won’t have the large budget to resurface the gyms later. Mondo Advance has a 10-year wear layer warranty, but beyond that, we have several other gymnasiums in Oklahoma that are more than 20 years old and still have plenty of life left in the Mondo flooring.”

McCaslin worked closely with Abdullah Ibraheem to determine which Mondo product would work best in so many schools. “The installations have been broken up into groups of three to six gyms, with the hiring of separate architects for each grouping. This creates a wide variety of design on the color patterns, paint for game lines and other markings on the gym floor. Most of the schools are not doing logos, but are using multi-color layouts with things such as borders around the basketball court, free-throw lines and center circles.” comments McCaslin.

From a designer’s view

David Hornbeek, principal at Hornbeek Blatt Architects says when they began working on the project, the public school system administrators had already established design standards for the gymnasiums. “What they originally wanted was wood floors but only on the playing surfaces. The out-of-bounds area and the remainder of the gymnasium would be a vinyl composition tile (VCT),” he notes. “The coach’s office, storeroom, and change rooms would also have VCT or ceramic tiles. Because of higher cost of wood floors, nobody wanted to pay for that option throughout the building. The wood and tile combination caused a terrible transition between surfaces.”

Hornbeek says his team is pleased that the school administration and school board looked at the Mondo flooring option with open eyes and recognized that there was a product that was not only sustainable and maintainable, but cheaper than wood flooring.

“Now the specs for these gyms include the performance of a Mondo floor or equal. The school administrators and maintenance people still have their choice of wood or rubber flooring, but the low-maintenance and extended durability of Mondo is very positive. They were also happy to know that wearing street shoes a Mondo floor would not damage it," concludes Hornbeek.

Erin Smith, of Smith Design Company, worked on one of the first school installations. “I was with Hornbeek Blatt Architects at the time and we had heard that the PTO (Parent Teacher Organization) at Nichols Hills Elementary was raising funds independently from the OCMAPS program,” she says. “One of the parents was a member of the Westminster Presbyterian Church in Oklahoma City and told the committee about Mondo flooring, which was installed in their church’s gym. David Hornbeek and I went to look at the facility and we were impressed. We got in touch with Ryan McCaslin at Performance Surfaces and along with Abdullah’s advice, we decided to use Mondo Advance.”

Smith says McCaslin was instrumental in helping them pick the right products. “Normally the gyms are really basic so it was nice to have this one element that is a step above and makes the gyms stand out. The school standard was originally just sheet vinyl, but it was important to Abdullah to have a nicer product.” 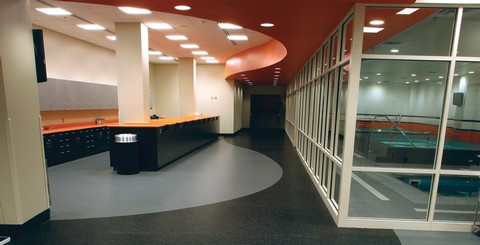