Located in the 13th arrondissement of Paris, the Tour-à-Parachutes stadium has recently been fitted out with a Mondo artificial turf football field with top-performing Ecofill Rebound® infill.

At a time when ecology is a strongly felt issue, the municipality of Paris has taken the decision to renew its sports facilities with this focus.

The City of Paris consulted various manufacturers to assess the different types of high-performance filler for the artificial turf sports surfaces available on the market.

The construction company Agilis praised the eco-compatibility characteristics of ECOFILL REBOUND® and, after some time, was assigned the task of installing the MONDO 4NX 16 45 AER EFT10 systems (realized with that performance infill) at the Tour-à-Parachutes stadium - one of the 30 major amateur football pitches managed by the City of Paris.

Like most of the amateur football fields in Paris, the Tour-à-Parachutes stadium has an artificial turf surface which needs to be renewed after a certain length of time. In summer 2019, the city chose Agilis to carry out the work, opting to use the MONDO 4NX 16 45 AER EFT10 system. Despite the limited space for unloading and storing the materials, the four experienced operators responsible for laying the material managed to install the 6,000 m2 of playing area in just three weeks.

The artificial turf system and its infill (Ecofill Rebound®) has now become a reference solution for the City of Paris. A guarantee of success for the collaboration between MONDO and Agilis.

The debate on recycled SBR

The choice of this type of performance infill makes the headlines in a moment when the capital is trying to avoid the use of SBR (Styrene Butadiene Rubber) - rubber made from recycled tyres. A study by ANSES (the French national agency for food, environmental and occupational health and safety) has, in fact, highlighted the potentially harmful effects of SBR on health and the environment. Often used as a high-performing infill for artificial turf football pitches, thanks to its reduced cost and easy maintenance, SBR contains traces of heavy metals and polycyclic aromatic hydrocarbons (PAHs) however, and these are dangerous for both man and the environment as they can pollute water tables.

On the other hand, various studies carried out by RIVM (Dutch national institute for public health and the environment), ECHA (European chemicals agency) and US EPA (United States environmental protection agency) have shown that SBR contains very limited amounts of heavy metals and PAHs, certainly not sufficient to justify health fears. Furthermore, no link has been found between the cases of leukaemia examined and the use of playing areas in artificial turf with SBR infill granules.

Having said that, many do now prefer to use other infill materials for artificial turf surfaces, as a precaution.

In an artificial turf system, the infill carries out three main tasks. First of all, it helps to stabilise the turf by giving it some weight. It also fulfils certain functions of a sports nature (it guarantees elasticity, rotational resistance and shock absorption via the surface) and provides enhanced playing comfort. Finally, it is also thanks to the infill that an artificial sports surface feels so much like a natural pitch.

To replace the thermosetting infills (of which SBR is one example), a number of solutions have been developed: organic (or "plant") infill based on coconut fibre, cork or bark; inorganic (or "sand") infill that uses recycled inorganic materials; thermoplastic infill.

The latter is particularly interesting for its resistance to UV rays, its uniformity and its excellent elasticity.

The Ecofill Rebound® high-performing infill belongs to the category of thermoplastic infills too. Thanks to its polyolefin granulate, it perfectly reproduces the properties of a natural grass pitch, allowing smooth acceleration, rotation, traction and torsion movements.

The energy return of this granulate is 70% less than that of a traditional SBR filler: this reduces premature fatigue as the athletes' muscles and joints aren't subjected to additional strain.

What's more, the lower vibration frequency (80% less than that of traditional fillers) notably curtails the risk of accidents because it optimises the stability of the surface.

Compared with SBR, Ecofill Rebound® has a density 40% higher so it guarantees reduced granule migration and a more even playing surface.

The primary strength of Ecofill Rebound® lies, however, in the fact that it doesn't contain heavy metals or PAHs. Subjected to the same tests used for children's toys (and which act as a reference), it doesn't emit odours or produce volatile substances. Despite its higher cost compared with an SBR based infill, Ecofill Rebound® presents no health risks and ensures easy maintenance as well.

Much more than an infill...

Although it initially wanted to respond to the critical issues raised by SBR, the City of Paris decided to adopt an approach sensitive to the global questions of eco-compatibility. The infill is, in truth, just one small part of a whole artificial turf system that also includes the carpet (fibres of varying natures and height), the backing (tufted or woven), a stabilisation system based on sand, and sometimes an elastic underlay.

The 4NX 16 45 AER EFT10 artificial turf system installed at the Tour-à-Parachutes stadium includes a 10mm elastic underlay that offsets the reduced shock absorption of the infill (compared with an SBR system).

The surface has fibres 45mm high and a backing with polyurethane coating and is completed with stabilising sand and Ecofill Rebound® infill to ensure the bio-mechanical and ecological properties that this product is known for.

Artificial turf pitches are becoming increasingly common; more and more often however, their use gives rise to fears for health and the environment. Paris seems determined to lay down new requisites for sports surfaces, and to lean towards more ecological solutions such as those developed by MONDO. Recyclable systems that respect the environment have a bright future ahead. 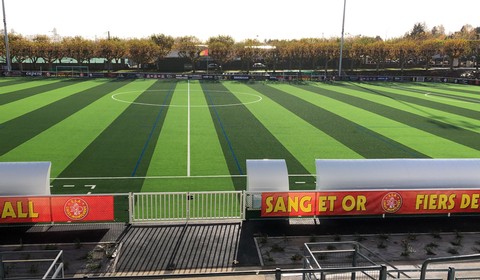 Renovation of the Paul Desgouillons Stadium