Can a building be an arena, and at the same time, a stadium and a concert hall? The Saitama Super Arena near Tokyo, attained never met before levels of flexibility and functionality due to a modern system of moving blocks. In 2006, it hosted the World Basketball Championship , which was played on a Mondo surface.

The idea of creating mobile architecture, where components can be enlarged according to the needs of the user, was an argument of discussion in Japan from the '60s, Kisho Kurokawa proposed his theory of metabolism, in which the integrated parts or components in an overall urban or arquitecónico could change in a structured system and expand. From those ideas the project was born. The work of the architect and designer Dan Meis and Ellerbe Becket, led to the construction of the Saitama Super Arena, a multi-functional area that combines three buildings into one and that stretches the limit on flexibility, with walls, ceilings, seats, and floors that move. The structure, has a gigantic moving section of seats that expands or contracts according to the events that the arena will host. In a few minutes it can be transformed from a stadium accommodating up to 37.000 people, into a auditorium with a capacity for 20,000 spectators or into a concert hall with a capacity of 6,000 seats. This super arena project won the prestigious Business Week/Architectural Record Award for achieving measurable business and organizational goals through the use of design.

The feature that makes the building possible to modify is the block system, that allows the gigantic structure, weighing 15,000 tons and 41 m high, to move a distance of 70 m horizontally, taking with it approx. 9,000 seats and numerous facilities, including toilets. The block system provides the designers with a great variety of layout options with space and seating. The central space is suitable for concerts or trade shows, The installation of artificial turf over the field makes the Saitama Super Arena the first sports venue in Japan equipped especially for American Football. The Arena is the ideal venue for indoor sports such as basketball, tennis, gymnastics, and boxing. In addition it is ideal for a variety of musical events with perfect acoustics. Finally, there is a common space, an area with natural light from outside that provides an open space for various events, from festivals to flea markets. For every event the Saitama Super Arena provides the ideal layout and its design allows it to host simultaneous events.

The Saitama Super Arena in 2006 housed the semi-finals and finals of the FIBA Basketball World Championship, the most prestigious FIBA event held in Japan that year. To equip the arena with the best flooring for such an important event, the organizers of the world championship referred to Mondo. In addition to installing a Fast Break System 2 Wood flooring, an approved removable wooden sports flooring of modular tiles, designed specifically for high-level competitions, Mondo also supplied the electronic scoreboards Pegasus and the four faces & four luminous board frames. The World Championship was won by Spain who won all nine matches, including the final match against Greece. The Bronze medal went to the United States. 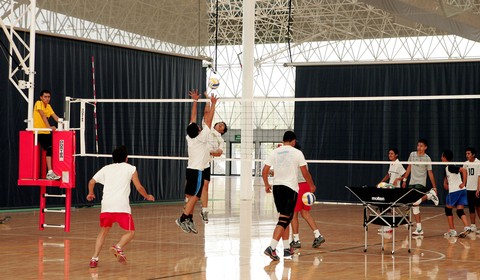