The IAAF today ratified a new world indoor record in the 4x400m men’s relay, which was set last March by the Polish team during the World Athletics Championships 2018 held in Birmingham on a MONDO track.
Zalewski, Omelko, Krawczuk and Krzewina clocked in a time of 3:01.77—a surprise for both the athletics world and for the athletes themselves, who had competed for the European record, but came in second behind a U.S. team. Now, however, they hold the world record!
World-record bragging rights went from one rival team to the other: the previous record was held by the Americans who, at Sopot 2014, also on a MONDO track, had crossed the finish line in 3:02.13.

BIRMINGHAM 2018 | SOPOT 2014
ATHLETICS WORLD INDOOR CHAMPIONSHIPS WITH THE BEST ATHLETIC PERFOMANCES: COMPARED RESULTS
The World Indoor Athletics Championships 2018 saw exceptional results: in addition to the record in the 4x400 men’s relay, 12 world leads, 6 area indoor records and 6 meet records were set on MONDO.
MONDO likewise was the supplier of the athletic track for the World Indoor Athletics Championships 2014 in Sopot, Poland. During that event, which was held on a removable MONDO Modultrack, the athletic performances also were excellent: the 4x400 men's relay world record was set by the U.S. (The previous world record had been set by an American team in 1999 at Maebashi, Japan, also on MONDO!)
In addition, 3 national records, 3 world leads, 1 season best and 5 personal bests were set in Sopot!
Unfortunately, no new world records were set during the 2016 World Indoor Championships. It’s a shame  that Portland did not choose a MONDO track!

CHOOSE MONDO IF YOU WANT TO SET YOUR RECORDS
Of all the current indoor world records, 73% were set on MONDO tracks. 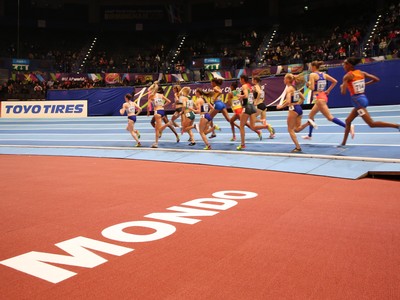