Awaiting for the World Championships in Beijing, a great evening of athletics on the Mondo track of the Teghil Stadium.

The XXVI edition of the International Meeting of Athletics Sport Solidarity of Lignano, took place in Lignano Sabbiadoro, on the Mondo track of the Teghil Stadium.  Organized by the Amateur Sports New Athletic from Friuli in Udine, the meeting is considered one of the greatest events of Athletics taking place in Italy. It is no coincidence, in fact, that this year the great athletes from thirty countries are participating, which were able to test their preparation for the upcoming World Championships in Beijing. As is the case since the first edition, held July 21, 1990, were included in the program also competitions for athletes with disabilities, some of whom have competed alongside great champions.

Coming to the races in the 100m men, success of Jamaican Julian Forte who ran in 10.18; behind him he was placed compatriot Andrew Fisher (10.21). In the 100m women, victory for the American Elaine Thompson, who equaled the meet record with a time of 11.11. Excellent performance by Italian director Matteo Galvan in the 400m: the athlete from Vicenza finished third with a time of 46.15, behind the Jamaican Rusheen McDonald, winner in 45.61, and the US Manteo Mitchell (45.82). In 1500m women, success for the US Kerry Gallagher, who set the record of the meet with a time of 4:03.56. In the men's race, winning the New Zealander Nick Willis, with a time of 3:39.31, the best time of the season for him. In the 800 m men, four athletes ran under 1:46, with Jeffrey Riseley winner with a time of 1:44.99, his best time of the season. In the women's race, success for the Australian Brittany McGowan in 2:03.03. In the 3000m men, victory for the American Eric Jenkins, who with a time of 7:41.79 he recorded his best time in distance. Great expectations for the 400m hurdles, with Ottavio Missoni Trophy which was won by the American Jeshua Anderson, who ran in 49.14; on the podium the Cuban Omar Cisneros (49.60) and the turkish Yasmani Copelloesco Bar (49.73), both with their best seasonal performance. In the 100 hurdles, winning perl'italiana Giulia Tessaro, with a time of 13.48. 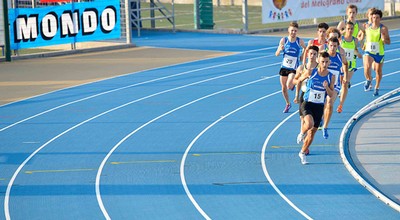