When the City of Birmingham put plans in motion to build an athletic facility on the former Alabama State Fairgrounds, they took the phrase “go big or go home” to heart – 750,000 square feet of big, to be exact.

The $46 million Birmingham CrossPlex officially opened on August 20, 2011 and now offers a world-class, multi-purpose athletic and meeting facility. Features include a 50-meter Olympic indoor swimming pool, a 200 meter Mondo hydraulic indoor track, and seating for 4,000 spectators. "We are proud to have, in my opinion, the best track facility in the country," says Birmingham Mayor William Bell.

The Birmingham CrossPlex has caught the attention of both athletes and business people alike. In its first year of operation, the city's Convention and Visitors Bureau projects that the CrossPlex will generate $13 million in economic impact.
"With the latest technology that has been built into this track, it makes it a world-class facility,” says Mayor Bell. “Athletes and athletic directors, and people who are significantly involved in the track and field arena all say that it will be a magnet for top-notch professionals who are track enthusiasts.”
He says these athletes will come to Birmingham and try to break world records because of the speed that is built into the Mondo track. “This has spawned a resurgence in the entire area, which means economic development for the city itself. Goals that were set out by the previous Mayor can now be realized.”

In years past, Birmingham was a major track center. But over time, the lack of facilities necessary to hold major events caused the city to lose its place in the track and field world. “We had a number of events at the high school level, but universities around the state of Alabama have their own facilities so they stayed away from Birmingham,” says Mayor Bell.
“Because of the technology built into this new track, now universities such as AAU, NCAA and different conferences are coming back to the City of Birmingham. All the dates available are already booked, with anywhere from 80,000 to 100,000 spectators expected in total. This includes both the swimming and track sides of the facility.” Going forward, Mayor Bell expects that number to grow. "Once we get our first year under our belt, we will be able to attract larger events.”
Adding a touch of luxury for spectators around the track are seven VIP suites. These suites offer 22 outdoor seats overlooking the track and indoor space with furniture seating.

The hydraulic track features a Mondotrack surface and is one of only six in the United States and one of eight world-wide. The state-of-the-art, six lane oval track takes just ten minutes to raise or lower. It can be set at any intermediate position between flat and fully raised and banked for high-speed running events.
When the track is lowered to be flush with the surface, spectators will see eight 60-meter lanes for sprint/hurdle events and the dual horizontal runways for pole vault, long jump and triple jump. Dual high jump approaches can also be configured along with dual throwing sectors for shot-put located outside the oval.
“There is no other facility like it in the entire state,” says Mayor Bell. “This is the first opportunity we've had to bring a facility such as this into the Birmingham region which makes it even that much more attractive.”
He says Mondo has always offered a consistent product. “When you tell athletes or coaches that you have a Mondo track, they all want an opportunity to compete on that surface. To have a facility of this magnitude in Birmingham will definitely put the CrossPlex on the map as one of the best track and field facilities in the world."

In addition to the hydraulic track, the CrossPlex is capable of housing nine indoor volleyball courts with dedicated flooring designed by Mondo for the facility. The floor can also be configured for a variety of non-track activities. “We signed an agreement with the Alabama Athletic Association to have volleyball, wrestling, and some other track and field events at the facility,” says Mayor Bell. “The building is very high tech and architecturally it is designed so well there is no such thing as a bad seat for the 4,000 spectators.”
During the initial design process, the City met with a consultation group that included the Lakeshore Foundation and the Lakeshore Rehabilitation Center. These organizations are part of the Special Olympics training program. "We are very confident that the end result of this design will easily accommodate all types of athletes, including those with special needs.”
The two-tone track colors were selected such that it would be neutral. "We selected these colors so they would be somewhat generic as not to clash with the high school or university colors of the teams as they competed,” says Mayor Bell.

Many non-sporting events can also be held at the CrossPlex. “We have a seating capacity of 4000, so as long as we protect the track we can have community-oriented events,” says April Odom, director of communications for the City of Birmingham. “Our meeting hall has over 5,000 square feet of space. It can be used for banquets and other social events. This facility is so flexible, and we have just started to look into all the ways we can take advantage of this great space."

Opening with a musical bang

On the official opening day, approximately 2,000 people attended the celebrations at the Birmingham CrossPlex. This event was billed as a symbol of civic pride and regional co-operation.
Mayor William Bell and members of the city council were on hand for the opening ceremony, which included high school bands and ROTC units. Activities were broadcast on the 54-foot jumbo screen with split-screen video/replay/scoring.
Easily accessible from hotels, restaurants interstate highways and the airport, the CrossPlex is just minutes away from downtown Birmingham. 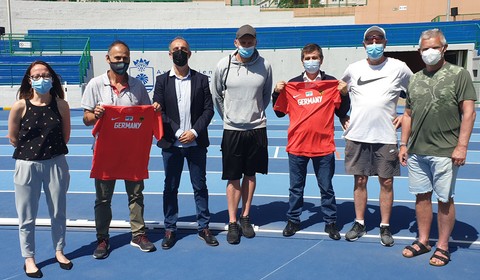