After 60 years in the waiting, Juve Stabia is back in the Serie B (the 2nd Division). This is an important success for the Campania based team and for Mondo, which supplied the team with the artificial turf football field in which this feat was achieved.

A celebration for two

When on June 19, 2011, the Juve Stabia soccer team won in the playoffs against Atletico Roma they earned a promotion to the Serie B. Apart from the thousands of fans that invaded the streets of Castellammare di Stabia, the team’s hometown, many were also celebrating in Gallo d’Alba. Whereas, for the Campania based team, this victory meant a return to the cadet series after 60 years in the waiting, for Mondo, which supplied the artificial turf soccer pitch where the blue and yellow shirted team plays, this is the first time it enters the Italian Serie B. Juve Stabia’s success was a veritable surprise because the club, which came from being promoted to the second division, had started the 2010/2011 season with other objectives. “It was supposed to have been a season of settling – said Clemente Filippi, the club’s general manager. The decision to hire an experienced coach such as Piero Braglia (from the First Division) was not random; it was made to try to lay a foundation for the team. However, everything happened quicker than expected and for this reason everything seemed even more beautiful”.  After the celebrations, Juve Stabia had to confront new challenges, including the renovation of the stadium while setting goals for the new season. “The goal is salvation – exhorted Filippi. Maintaining our position in this division is essential. It would be a shame to lose it after it took so long to reach such an important division”.

The synthetic turf soccer pitch in Menti Stadium underwent a series of renovations during the summer in order to bring it up to date with the latest FIFA requirements. It is made of the latest generation of Mondo artificial turf: Mondoturf NSF Monofibre 11 45 AE Star FTS. Due to the Ecofill infill performance, this artificial turf soccer pitch ensures players’ safety and performance, a uniform playing surface, excellent shock absorption and a controlled energy response. Moreover, it ensures a lower absorption of heat and it is more environmentally friendly. It is like playing on the best natural grass pitch; however, it lasts longer and resists all atmospheric conditions. “When we installed this grassy turf in 2009, we removed an older style synthetic turf pitch – said Gianpaolo Gola, Head of External Relations for Mondo’s Sport Division. The old field, installed in 2003, was replaced because it no longer conformed to the norms. The new turf was FIFA 2 Star certified which ensures the highest levels of play. The certification is achieved by installing an artificial turf that has been previously tested in a lab to verify its response, using machines that simulate the average use of a field, including longevity and exposure to ultraviolet rays. Other tests also performed measures how the ball responds to the artificial turf surface in terms of rotation and vertical bounce and how it acts when it strikes the surface at an angle. These are a series of parameters that are tested to ensure the highest player safety and that fully respect all the necessary prerequisites to play a football match”. The excellent work done on this pitch was confirmed by the speed with which the Romeo Menti Stadium was granted the FIFA 2 Star certification.

In order to comply with the rules of the Serie B championship, the stadium, apart from having the artificial turf replaced, was also subjected to other improvements. One of the changes concerned safety, the video surveillance system and external illumination was improved to ensure the best possible visibility especially during night matches. Nevertheless, the interior stadium fence, which had already been renovated still complied with Serie B standards therefore it remained unchanged along with the section for guest fans. The locker rooms underneath the stands were renovated and an anti-doping room was added. The seating capacity was increased to 10,000 people and the press stand was widened to increase the number of spots for journalists.

Is an artificial turf pitch an advantage?

While many teams in Italy and as many in Europe train on artificial turf, there remains a certain reservation about using it for football. Many say that an artificial grass pitch can result in a higher number of injuries.
“There have always been prejudices – says Clemente Filippi. Even when we installed the first synthetic pitch, there were concerns that it would cause a higher number of player injuries. I can say that with those first generation pitches, in the first years, the number of injuries was actually rather low. In the 2003/2004 season, when we were promoted from the Serie D division, the number of muscular injuries playing on an artificial pitch, was very low. Over the years, the injuries we have seen were caused by other factors and certainly not from the synthetic pitch. Today, the main cause is the rhythm of the match, which is much higher than in the past, and the playing surface actually does not count for much”. Another often heard and read comment is that those who play on synthetic turf have an advantage over those who play on a natural grass pitch. “It is thought that to play on an artificial grass field is an enormous advantage. I would not be so quick to say this, seeing as this year, we have lost the first two matches played at home (against Verona and Brescia). It is likely that during the first ten minutes of the match there might be some adaptation issues, but we have to consider that today any club demanding respect has the opportunity to train on a synthetic surface, because the need to be able to train even in rain and freezing temperatures exists for everyone. I don’t think there are advantages; the only difference is the spectacle, because the plays and the pace are faster with respect to a natural pitch”, adds Filippi. “When you play on a synthetic pitch, the way in which a player kicks the ball changes, as it turns with far greater speed”, confirms Nazzareno Tarantino, a forward for Juve Stabia.

Why an artificial turf pitch?

One of the reasons for which a club decides to replace natural grass for artificial turf is no doubt the lower maintenance required and the pitch’s greater resistance to the elements.
“The Menti Stadium abandoned the natural grass pitch in 2003 and chosen a synthetic turf largely for logistical reasons – says Juve Stabia’s general manager. Seeing as there are few playing fields in the area of Castellammare di Stabia, the club needed a pitch that could resist continuous use from training and official matches from all the teams that use the municipal stadium. Natural grass created problems in this sense, while the artificial one, apart from it being usable in every atmospheric condition, has brought benefits from the maintenance point of view”. While it is true that the maintenance of a synthetic pitch is minimal with respect to a natural pitch, it is also true that minimum care is still needed. It is better to brush it and to compact it every occasional in order for it to remain in perfect condition, especially when it is used every day by dozens of teams. By spending anywhere from two to three thousand Euros a year, one can be sure that the pitch is being maintained in perfect order avoiding the risk that it could start to deteriorate before its time. “Artificial grass that is not well cared for and that is not approved can cause countless physical problems – said Roberto De Filippis, athletic trainer for Juve Stabia - in particular, problems for the flexor muscles. The artificial grass turf allows for training even in prohibitive weather conditions and in general, in football players, it can generate greater reactivity. 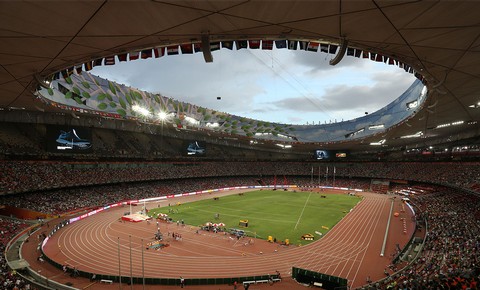 Beijing 2015, the history of a running track