Since 1845, the United States Naval Academy has been educating and training men and women to be qualified naval officers. Based in Annapolis, MD, the Academy’s mission is to develop midshipmen “morally, mentally, and physically.”

Each person will have the advantage of learning a wide variety of skills through core courses, including engineering, science, mathematics, humanities and social science. Once completed, the men and women who graduate from the Academy can pursue almost any career in the Navy or Marine Corps.
The other integral component of attending the Academy is its athletics program, which provides leadership opportunities and the experiences of team play, cooperative effort, commitment and individual sacrifice.

Wesley A. Brown graduated from the US Naval Academy in 1946 and broke an important color barrier. He was the Academy's first African-American graduate. In 1969, Lieutenant Commander Brown retired from the Navy's Civil Engineer Corps after an illustrious career. Along the way, he joined the faculty of Howard University as physical facilities analyst. On May 10th, 2008, the Navy honored Brown by naming its newest facility after him – the Wesley A. Brown Field House.

In 1999, the field house at Howard University had been scheduled for work to shore up the aging floor area, but the repairs were costly and would not be permanent, requiring further expenses. Stephen Cooksey – associate professor of physical education and head coach of the successful midshipmen’s track and field team – approached the P.E. department head, Tom Virgets. “I said I would be willing to stay out of the indoor facility for a year if we could get a new surface there,” says Cooksey. Virgets gave him an even better idea – try to find space for a new building. That space was found, and soon the University was on its way to having a brand new field house.

From the start of design discussions, Cooksey wanted a banked track. However, the director of athletics, Chet Gladchuk, was intent on his plans to ensure the building would accommodate training for soccer, football and other sports. That meant the magic carpet system, a retractable synthetic turf system, would rule out a banked track. “I told him about the Mondo track hydraulic system that goes from fully flat to banked when required,” says Cooksey, who had seen the track at Penn State. As the head coach of the Indoor World Championship in March 2008, he saw it again in Valencia. “I began to look at Mondo more as the project moved forward. When I was able to go to Montreal and see the plant, and see how the surfaces were put together, I was convinced that was the way to go.”

The LEED-certified field house met the exacting standards in materials throughout construction, including Mondo sport impact surface in the weight room and other sport courts. With the colder weather, both the men's and women's Navy track and field teams began using the Mondo hydraulic track by November. “Everyone is extremely pleased, from the students on the team to the coaching staff,” says Cooksey. “Word has gotten out that we have a new hydraulic system, so we have teams galore wanting to sign up and have competitions here. The reaction has been nothing but fantastic!”

Cooksey says the variations on training styles are easily obtained through adjustments in the hydraulic track. “On days we're thinking of speed we have the track all the way up, banked at 100 percent. On days we're going a little longer, we're down to the 50 percent and 30 percent ranges. This helps to make adjustments for kids’ legs.” He adds there is a bonus to the new Mondotrack. “In terms of impact on the athlete, I feel like they get a little more bounce out of the running track. I think it's going to help them.”

The Naval Academy's men's and women's track and field programs have consistently produced star athletes and the new hydraulic running track promises to carry that tradition further. December brought both the men’s and women's opening invitational competition, followed by meets in January. The opening invitational, named for Wesley A. Brown, has 6 star teams in its line-up, “We have Tennessee coming in, ourselves, University of Maryland, Georgetown, Princeton and Lasalle,” says Cooksey.

Mondo’s technology is playing a significant part in the on-going commitment to first-rate athletics at the US Naval Academy. When the field house was inaugurated by Admiral Michael Mullen, Chairman of the Joint Chiefs of Staff, the ceremony was moving for Brown. “This is certainly the most wonderful moment in my life. This is the most beautiful building I've ever seen. It's majestic.”

An appropriate way to build a lasting legacy to honor Lieutenant Commander Wesley A. Brown. 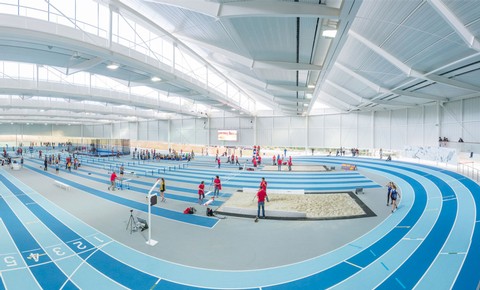