The Scottish city was chosen by European Athletics at its Council meeting in Amsterdam ahead of Apeldoorn in The Netherlands, Minsk in Belarus and Torun in Poland.
The event will be held at Glasgow’s Emirates Arena, which earlier this year hosted the prestigious Indoor Grand Prix, the world’s leading indoor athletics event, and the British Athletics International Match from 2013 to 2015.
The Emirates Arena boasts a state-of-the-art variable banking hydraulic track installed in 2012 by Mondo.
This unique system, first installed in 1987 at the National Institute for Fitness and Sport in Indianapolis, Indiana, and in the most prestigious multi-venue training and competition facilities ever since, has evolved substantially over the years.
Nowadays the system is fully controlled by a PLC (Programmable Logic Control) system, which allows for simplicity of operation and guarantees optimum progression of the curve at every incline level.
When required for competition or training, the track bends can be conveniently raised to the required height in a matter of minutes, at the push of a button.
The track can be set at any intermediate position between flat and fully raised, so it can be used for a wide range of training activities and by athletes with different abilities, from younger or slower to world-record holders. 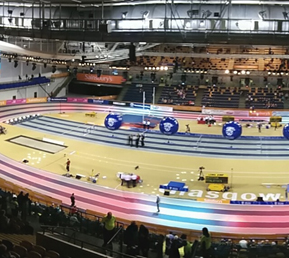