With the installation of the track surface and the construction of the locker rooms, the athletics center can be considered successfully completed.

In the new facility, the opening day, the 23rd Memorial Todaro will be held along with the fifth round of the Trophy "Luigi Modena", organized by the Libertas Tolmezzo from athletics and Udinese Malignani with the support dell'assessorato Sport of Friuli Venezia Giulia and the City of Tolmezzo.

It also held out an invitational competition for the five thousand meters where some athletes from Kenya, Tunisia and Morrocco have participated. The committee that will handle the event consists of Venanzio Ortis, European champion in the 500m in Prague, Francesco Martini, Councillor for Sports of the town of Tolmezzo, Stefano Secco Vice-President of the Provincial Center Libertas Udine, Manlio Savorgnan, Athletic Malignani’s President, Franco Cimenti and Angela Longo of Libertas Tolmezzo.

This event was enhanced by the reconstruction works on the track and sport platforms of the facility, completed this summer with truly innovative materials and funded by a € 650,000 grant given to the City by the Mountain Community of Carnia. The city councilor for sport, Francesco Martini is considered very pleased to have brought Tolmezzo two events of particular depth and interest.

Mondo has been once again the protagonist with Mondotrack, the official track surface of London 2012, an innovative material which last year attracted numerous accolades from athletes and coaches for its performance and comfort. This year in London many new and numerous world records were set. 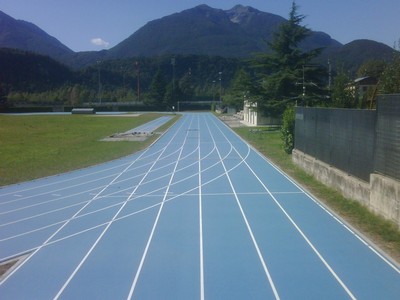