Few events have had such a profound influence on the world of sport and its host city as the 1992 Olympic Games. The Games had as much of an influence on Barcelona as it had on Mondo who took the opportunity to make major changes, beginning with a new approach to the design and production of athletic tracks.

The 1992 Olympic Games in Barcelona brought significant changes both to the Games organization and to sport in general. For the first time, the opening ceremony carried an importance never seen before. The city also went through a major change: between 1989 and 1992, the construction sites dealt not only with the building new sport facilities but with revamping all of Barcelona as well.
Mondo played a profound part in the change.“The involvement was deep from the start, both with the city and the Organizing Committee with which we have managed the construction step by step. When the refurbishment of the Olympic Stadium was started, we worked side by side with designers and architects. It was a new and important experience for us”, remembers Andrea Vallauri, responsible for Mondo’s Sport Division.

The construction of Barcelona’s Olympic Stadium was started in 1927. It was completed and inaugurated in 1929 coinciding with the opening of the International Exposition held that year in Barcelona. In 2001 it was renamed after the former president of Generalitat de Catalunya Lluis Companys who was executed at the nearby Montjuiv Castle in 1940 by the Franco regime. The stadium was originally designed by architect Pere Domenech i Roura. Before the 1992 Olympics the structure had mixed fortunes. In 1936, it was supposed to host the People’s Olympiad, an event organized to protest the 1936 summer Olympics in Berlin but the event was cancelled due to the outbreak of the Spanish Civil War.
In the 70’s the stadium was semi-abandoned and the stands deteriorated. During this time the stadium was utilized as a paddock by Formula 1 teams during the Spain Grand Prix race held at the Montjuic circuit. In 1989, however, the old stadium started a re-birth to prepare for the 1992 Olympic Games that were to be held in the Catalan city. The Italian architect Vittorio Gregotti was involved in the reconstruction. Large portions of the old structure were demolished and new spectator stands were built. Only the façade of the old building was preserved. The new Olympic Stadium was inaugurated in 1989 for the World Cup in Athletics which truly was a bench test for the imminent Olympic Games. The stadium still is the most amazing structure inside the Olympic Ring on the Montjuic hill.

For the Barcelona Olympic Games, Mondo supplied six Mondo SuperX tracks including the one inside the Olympic Stadium. The organizing committee was impressed by the characteristics of this product. Its design allows for maximum momentum with minimum contact between foot and track. This permits athletes to reach higher speeds with less effort. These results were confirmed by a biomechanical study conducted by Harvard University: 50% lower contact on SuperX tracks compared to all others. At the same time, another study by University of Jyvaskyla, Finland demonstrated an 11% energy reduction on Super X tracks. These characteristics, combined with an exceptional resistance to abrasion (three times as much as other products), convinced the Organizing Committee to give Mondo the 1992 Barcelona athletic tracks job.

The tests that led to the realization of the tracks for the Barcelona Olympics have profoundly changed Mondo.
“With the Barcelona Games- Vallauri remembers-, for the first time we started researching the product formula and we have been able to significantly improve it. We started to collaborate with both the Turin and Milan Engineering University and for the first time we tackled the subject of biomechanics applied to athletic tracks.In the ‘90ies this was an absolute novelty”. Before these Games, the track was just considered a lining, almost an accessory. “After Barcelona 1992, the track was seen as something that can change the athlete’s performance”, Vallauri further remembers. The 1992 Games also set up the opportunity to establish Mondo Iberica, virtually born the moment the agreement between the Alba’s firm and IAAF for the supply of the Olympic tracks was signed.
“With Barcelona 1992 we established ourselves as the No. 1 supplier of athletic tracks. Before the Olympics we were “one of the suppliers”, after we became “the supplier”. We now have gained credibility with the Olympic Committee due to the significant amount of work we carried out for the supply of the six tracks complete with design and installation management. The expansion of Mondo in Spain and Hiberic Peninsula started there”, concludes Vallauri.

Barcelona’s Olympics were certainly affected by the geo-political turmoil that shook the world in the years just before the Games. The fall of communism and the dissolvement of the Soviet Union allowed some countries, after very many years, to be individually represented at the Games: Estonia and Latvia (since 1936), Lithuania (since 1928), while 15 other ex Soviet Republics competed under the Unified Team name. The fall of communism in the USSR and the end of the Cold War, contributed to the fact that, for the first time since 1972, there were no boycotts of the Olympics. The fall of the Berlin Wall allowed the two Germanys to participate as a single delegation for the first time since 1964. Due to UN sanctions Yugoslavia athletes were not allowed to participate in any team sports however athletes could participate individually under the Olympic flag. Croatia Slovenia and Bosnia-Herzegovina for the first time attended the Games as independent nations. Also South Africa was allowed to compete in the Olympics for the first time since the 1960 Games, after a long suspension for its apartheid policy. In every regard, the 1992 Olympic Games were unforgettable. 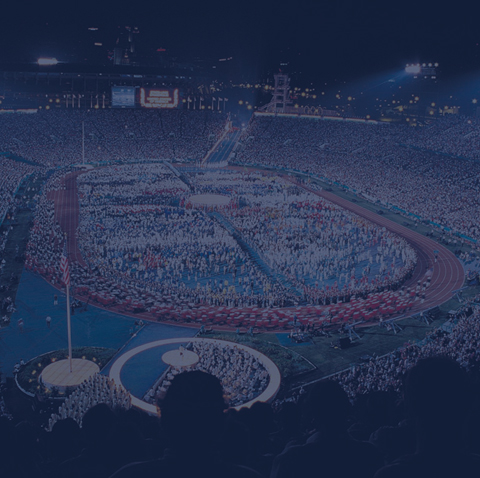