IT WAS AN INDOOR TRACK SEASON TO REMEMBER

his indoor season has simply sizzled with athletes competing on Mondo tracks racking up an abundance of world leads and world bests, along with too many personal bests to even count.

Some special highlights on the most amazing moments of the indoor tracks season.
Genzebe Dibaba ran the fastest ever recorded time indoor for the 2000m which according to the IAAF, “… although the 2000m isn't an official world record event indoors, Dibaba’s performance … can be classed as an outright world record as it is faster than Sonia O’Sullivan’s outdoor mark of 5:25.36”.
The new High School star Armand “Mondo” Duplantis, with his 3 World U20 Records, has driven up the bar of the pole vault of over 12 cm in less than one month.

And while the European Indoor Championship has gone unnoticed, the 2 incredible European Records out of 2 were set on the MONDO Portable Banked Modultrack in Birmingham. Laura Muir, on her debut to remember over 1000m with 2:30.94, moved to second on the world Indoor all-time with 2:30.94. Mo Farah, in his latest Indoor Race over 5000m, broke the European record with an incredible 13:09.16.

Mondo would like to congratulate all athletes on a simply unforgettable indoor track season!

MONDO ALWAYS ON ATHLETES' SIDE 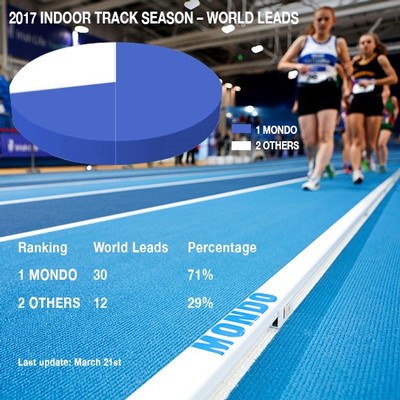