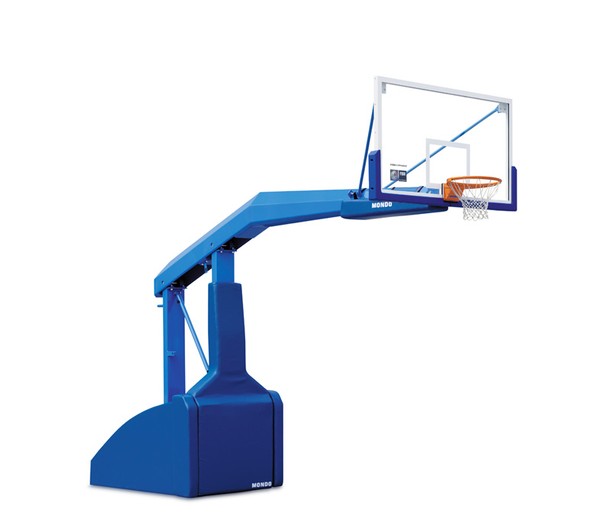 Set of two MONDOATHENS basketball units, mainly designed for multi-sports facilities and installations that host highest-level basketball competitions. Due to its design and ease of transport, the MONDOATHENS basketball unit can be easily and quickly folded for quick storage when not in use., This does not affect its structural properties such as resistance, rigidity and stability with respect to any pressure that is applied during basketball games. These features provide versatility to the facilities using these units.

All dimensions, requirements and specifications have been made in order to meet the different regulations established by the International Basketball Federation in the official rule appendices, as well as stipulated by the European standard UNE-EN 1270, which makes it one of the highest-level basketball units on the market.

With regards to its design, calculations and dimensions, the MONDOATHENS basketball unit has been developed with the highest computer-assisted design technology. Studies were conducted on resistance and rigidity using the finest analysis in order to achieve maximum safety and stability, to satisfy the specified requirements.

The MONDOATHENS basketball unit is comprised of a structure, made of cold-formed bars and steel structural tubes.

The structure is comprised of an upper arm, which is the section that actually supports the board and is responsible for transferring stresses to the base. There are two vertical posts attached to the base and to the upper arm by 8 pivot points, and each has self-lubricating bearings that help facilitate the folding and unfolding process.

Finally, there is the base, which is the element that the posts rest upon. The base is responsible for keeping the whole unit firmly in place and making it stable. In addition, it is equipped with a transport system consisting of wheels and the necessary counterweights to move and handle it, guaranteeing stability during the folding and unfolding processes.. It is important to note that these are not the appropriate counterweights to use with the unit when playing basketball. During use, the basketball unit must be anchored or additional counterweights must be added. Apart from these transport counterweights it also has a series of anchorage points on the rear of the base, which enable the basketball unit to be fastened to the floor. The manual folding and unfolding operations are made easier by a set of traction springs that provide the force required to elevate and lower the basketball unit.

Once the basketball unit has been folded, it can be moved manually with the 8 wheels incorporated into the base, 4 wheels are swivel for easier steering and the other 4 are fixed bearing wheels.

The basketball unit board, net and tilting ring are manufactured according to the European Standard UNE-EN 1270 requirements.

MONDOATHENS has been FIBA Approved, certificate for level 1 competitions and it has been used in several highest level basketball competitions: