11 DAYS TO THE OPENING CEREMONY

11 days to go before the inauguration of the second edition of the European Games that will take place in Minsk from 24 to 30 June. 23 disciplines, 50 nations, represented by over 4,000 athletes: these are the numbers of the Games. The athletic competitions will take place from 24 to 28 June at the renovated Dinamo Stadium; the location will also host the opening and closing ceremonies of the event. The venue is one of Belarus’ main sports arenas. In July 2018, the Dinamo Stadium received a class one facility certificate from the International Association of Athletics Federations. The athletes who will participate in the athletic competitions will be 630 and for the first time the DNA formula (Dynamic New Athletics) created by the European Athletics Federation will be proposed. Details of DNA were released in 2018, with European Athletics billing the format as an "action-packed new mixed-gender team event built on tactics, competitiveness and grit". The team competition will feature 100 metres events for men and women, along with sprint hurdles races. It will also include a mixed 4x400m relay, as well as men's high jump and women's long jump and javelin. In addition to the more traditional events, new disciplines "The Hunt" and "Track’athlon" will both feature on the programme. Six teams will feature in each match, with the winners and highest second-place team advancing from the first round to the semi-finals. The remaining 24 teams will compete in the second round, with the four winners and two best runners-up reaching the semi-final. The top three teams in both semi-finals will qualify to the final stage of the tournament, where the team medallists will be decided.

Click here to watch some pictures of the Dinamo Stadium equipped with MONDOTRACK WS. 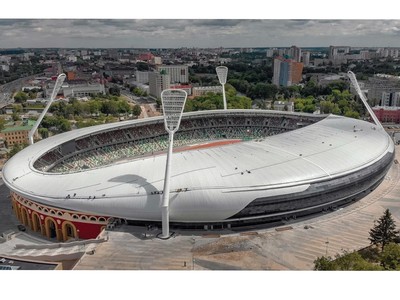