TEAM EUROPE AND TEAM USA HAVE ANNOUNCED THEIR TEAMS

The Match Europe v USA is an international two-day outdoor track and field competition between the United States and Europe, set to take place on 9–11 September at Dinamo Stadium in Minsk, Belarus on MONDO. The competition is scheduled three weeks prior to the 2019 World Athletics Championships in Doha, Qatar were again athletes will compete on MONDO. The Match marks the first international match between the two squads since the 1960s. The Event– which is a four-a-side contest in each of the individual events and features two teams apiece in the relays – will be the first ever outdoor meeting between the two powerhouses of global athletics. The full list of confirmed athletes for Team Europe can be seen here while the Team USA competitors can be seen here.
The Match will take place in the Dinamo National Olympic Stadium. The stadium was fully refurbished in 2018, with a new MONDO track as well and seats 22,000 spectators. It was packed close to capacity for the inauguration of Dynamic New Athletics during the European Games in June.
Eurovision Sport will ensure wide free-to-air coverage of The Match across Europe. 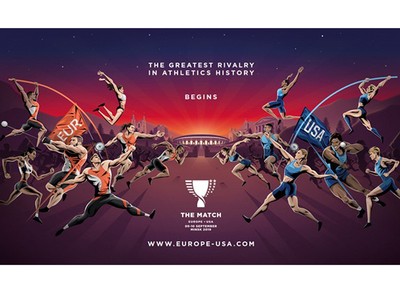