Since 2002, the North Metro Miracle League (NMML) in Woodstock, Georgia, has been developing a winning attitude for players who would otherwise be sidelined. Inspired by their slogan, “Doing Ordinary Things * With Extraordinary People”, this organization’s mission has created facilities and programs that have served the entire community for many years, including people with disabilities. What better way to gather the team and spectators than a baseball game!

John McLaughlin, director of the NMML has spearheaded the movement to ensure inclusion of everyone in local sports activities, including people with mental or physical disabilities and those who have behavioral issues. “Our age range goes from 4 to 78, and we serve hundreds of families that have at least one member with a disability,” says McLaughlin.

When the league began in 2002, the NMML had 22 players. They were forced to borrow other teams’ fields as they did not have a facility of their own. Today the Miracle League has grown to include 22 teams and with their state-of-the-art field, other teams are borrowing the NMML field on a regular basis.

“We have a pool of over 3,000 volunteers that assist and participate in the various programs. Many of them act as “Buddies”. That means they are paired up with a disabled person so they can help that player do the things their disability prevents them from doing for themselves. “

Other changes over the years included a $2,300,000 barrier-free adapted sports complex. It offers an artificial surface field, a wheelchair accessible playground and a large picnic area. A multi-purpose family center rounds out the options for all members of the community.

Raising money for a special cause

As with any community sport, awareness is an important base to conduct fundraising efforts. “The best thing a league can do is to start playing ball at an existing facility; “ says McLaughlin. “That way you generate public awareness and eventually public awareness translates into financial support.”

He adds that often it is better to ask for the gift of time first. “Introduce people to the program before you ask for money. Invite business and civic leaders to the games. Invite media people. Invite high school, civic and faith based organizations. Encourage them to become an on-field buddy. The experience is very compelling; you will capture their hearts and many of them will eventually come to you and ask how they can help. “

For people with disabilities, playing on a team offers opportunities to get off the sidelines and into the game, be it baseball or life in general. “Participating in sports goes far beyond just getting in better physical shape,” says McLaughlin. “It leads to higher self-esteem, improved physical and social skills and happier, healthier lifestyles. For people without disabilities it offers an opportunity to give back through meaningful community service. “

In December 2005, the NMML was honored by the National League of Cities (18,000 US Cities) for developing one of the nation’s most innovative and effective programs that enriches the entire community.

The blending of people with and without disabilities helps remove barriers to friendship. People with disabilities have talents and gifts to share with others if only given the opportunity, McLaughlin adds.

Once the adults leave the school system they are living in a vacuum devoid of social and recreational opportunities. “It is easy raising money for ‘cute little kids in wheel chairs and walkers, but raising money for adults with disabilities is much more difficult,” says McLaughlin. “The cute little kids eventually grow up; we shouldn't abandon them simply because they grew up and became adults. “

No matter the age, safety is crucial in sports for disabled players. “People with atypical brain or spinal structure caused by disease, trauma or birth defect very often have difficulty adjusting to very high temperatures,” says McLaughlin. “Overheating can lead to seizure disorder. “

He says many people are also sensitive to latex. “Within the disability community the number of people and the degree of sensitivity is much higher than the overall population. This is a very serious consideration.”

The North Metro Miracle League’s choice for a playing surface was the Mondo Super X Performance for several reasons, including the fact that it is inherently cooler than alternative products. “We needed a surface that could also withstand high stress applica-tions such as the power wheel chairs,” says McLaughlin. “It had to be consistent and predictable across the entire surface, highly durable and easy to maintain. Super X came as a winner in all issues. “ 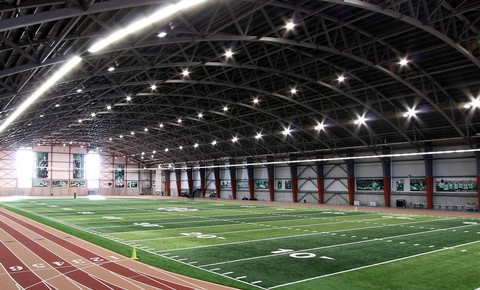