FIRST UEFA WOMEN'S FUTSAL EURO 2019: THE SEMIFINAL AND FINAL PHASES WILL BE PLAYED ON MONDO!

The first UEFA Women's Futsal EURO final tournament begins on Friday in Portugal with four teams going for the title: hosts Portugal are joined by Russia, Spain and Ukraine in the inaugural finals in Gondomar from Friday. The teams will battle on the flooring provided by MONDO, FAST BREAK SYSTEM 2 LAMINATED. Mondo technicians have recently completed the pitch installation at the Pavilhão Multiusos in Gondomar, Oporto.

This is the Semifinals program, February 15th:

And here the program on Sunday 17 February:

FAST BREAK SYSTEM 2 LAMINATED was specifically designed in collaboration with UEFA for high-level competitions. In 2007, it became the official surface for UEFA international competitions. The system has been further personalized with the look of the games colors and specific colors combinations were studied to always determinate ball’s position during all match’s phases, as happened also for this event: the perimeter of the playing area was expressly realized in a beautiful pink tone. 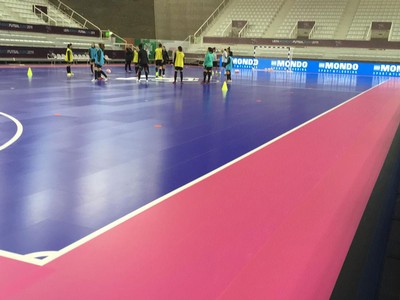