Today, from the collaboration between our research and development laboratories, padel athletes and technicians of the WPT, a new exclusive system for padel pitches is born: Supercourt XN, the new  fiber-combined turf system by Mondo, Official Product of the World Padel Tour 2021.

Supercourt XN: a match-proof turf system
Supercourt XN is an innovative fiber-combined turf system that associate in a single system the exclusive Mondo textured monofilaments, STX and XNOVA. The final result? Even more control between grip and glide, increased ball speed, while maintaining an even ball bounce anywhere on the pitch: as a result, faster, fun and safe play.
Thanks to the double textured fiber, Supercourt XN "traps" the sand, preventing it from remaining on the surface, unevenly distributed, or from accumulating during matches.
This not only improves the aesthetic appearance of the court, but also increases its wear resistance and minimizes the risk of abrasion, both for players and the felt of the ball. Watch the Supercourt XN product video here!

World and World Padel Tour
MONDO is Official Supplier of the World Padel Tour since 2015.
World Padel Tour has confirmed MONDO its Official Supplier until 2023 and the choice of Supercourt XN as the official artificial turf system for the pitches of the 2021 circuit demonstrates once again the common commitment to promote and improve padel game. With Supercourt XN, players will have greater ease and control of their movements, uniform support throughout the field and more security in the game.
Discover the Mondo range of sport flooring designed for padel here! 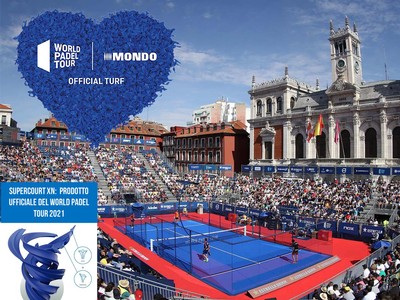